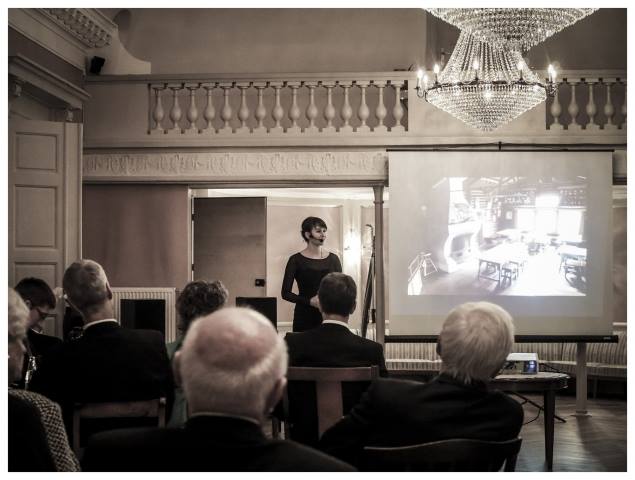 Anna Ulrikke Andersen (PhD) is a filmmaker and architectural historian, currently a Postdoctoral Researcher at the University of Oxford. As part of the Disobedient Buildings Project at the School of Anthropology and Museum Ethnography, she uses filmmaking and photography to explore housing, welfare and wellbeing. She is a Junior Research Fellow at Wolfson College, Oxford, and a 2021 Fellow of the Future Architecture Platform.

Her work explores how filmmaking could be used to engage with patients living with chronic illness experience place and architecture. This ongoing research project titled An A to X of Chronic Illness: patients’ architectural histories (an incomplete guide), will result in a series of written essays and essay films tackling different spatial experiences of living with chronic illness. The project was developed during a Fellowship at Harvard University Film Study Center 2018-2019, funded by Viken Filmsenter, and through collaborations with the London based disabled and queer poet Abi Palmer, funded by the EU i-Portunus mobility scheme. Together with journalist and documentary filmmaker Anne Silje Bø, she was awarded a grant from the Norwegian Arts Fund for the cultural heritage project Ubehandlet, exploring how the COVID-19 pandemic affected the treatment of patients with rheumatic illness. The project was selected for the revisiting the future architecture collections exhibition by Lisbon Architecture Triennale as part of Future Architecture Platform 2021. The result was the exhibition Chronic Conditions: Body and Building at Palácio Sinel de Cordes in Lisbon 12 October to 11 December 2021, designed by the Paris based architecture office L’Atelier Senzu.

Her first book Following Norberg-Schulz: An Architectural History through the Essay Film is forthcoming with Bloomsbury Publishing 2021. The book is based on her PhD from the Bartlett School of Architecture, UCL, focused on the window in the life and work of the Norwegian architectural theorist Christian Norberg-Schulz, and was supervised by Professor Jane Rendell and Dr Claire Thomson. Titled “Ten Windows Following Christian Norberg-Schulz: framing, mobility and self-reflection explored through the fenestral essay film”, this thesis consists of a series of films and written essays. Structured around a set of journeys between Norway and Italy, her focus on the key terms framing, mobility and self-reflection are addressed to grapple with her position as a follower of Norberg-Schulz: his life, theory and work. This work was screened at Kunstnernes Hus, Oslo, at the event Following Thinkers 25 January 2020, and resulted in “Windows” – episode 50 the Boring Talks by BBC.

Her research has been presented at institutions such as the 2014 Venice Biennale, Oslo School of Architecture and Design, Harvard University, University of Puerto Rico and Universidad Piloto de Colombia, and she has been published in Architectural Research Quarterly, LOBBY Magazine, Montages Magazine and InForma Journal. Her films have been shown at the Royal Academy of Arts London, the 2017 Essay film Festival, the Arctic Moving Image and Film Festival and Trondheim Academy of Fine Arts/NTNU. She is the founder of the Bartlett Film+Place+Architecture Doctoral Network, and in 2017 she was awarded an artist residency from the Utzon Foundation and the Danish Cultural Fund to work and live in Jørn Utzon’s villa Can Lis, Majorca, resulting in the film Cleaning at Utzon’s (2019) that was screened at Modernism Week at the Architecture and Design Festival in Palm Springs, CA 2020. In collaboration Ruth Bernatek, she co-directed the film X / Earwitness (2018), where filmmaking is used to trace a set of journeys by the Greek composer and architect Yannis Xenakis.

Her interest in ways in which creative practice and academic thinking can meet and inform each other is a recurrent theme of her practice. Her early works include films like The Spirit of the [Natural] Place (2013) and Pies i Kot (2009). She has been a participating artist in the Norwegian artist coalition Smitte, and was the artistic director of Circus Universe, a comic book in four issues (2008-2011).